429 national, state, and local organizations write to express support for the Housing Opportunities for Persons with AIDS (HOPWA) program to be funded at $600 million for FY2023

We, the undersigned 429 national, state, and local organizations, write to express our strong support for the Housing Opportunities for Persons with AIDS (HOPWA) program in the Transportation-HUD appropriations bill. We implore the House of Representatives and Senate to fund HOPWA at least at $600 million in Fiscal Year (FY) 2023. Last year’s enacted amount of $450 million resulted in losses of over $15 millions to jurisdictions throughout the country, thereby jeopardizing the housing of over 1700 very low income people living with HIV/AIDS.

HIV/AIDS is a communicable virus/disease. Those who lack stable housing, and those without homes, are 20% less likely to achieve viral suppression, thereby being able to transmit HIV to others. Without addressing housing needs for low income people living with HIV, the United States plan to end the HIV epidemic becomes null. Since the announcement of the Ending the HIV Epidemic: A Plan for America, leaders have acknowledged that the United States has the medical tools necessary to end the HIV Epidemic, but have ignored the housing needs that are necessary to achieve these goals. Inadequate funding of the only federal housing program solely dedicated to addressing the housing needs of individuals with HIV/AIDS will be a barrier to the Ending the HIV Epidemic: A Plan for America initiative.

Advocates are calling for an investment of $600 million into the HOPWA program to ensure that almost all current grantees are at least brought back to their original funding levels and to begin to address the real need of thousands of low-income persons living with HIV. In the United States, an estimated 100,000 people with HIV/AIDS are experiencing homelessness, with an additional estimated 300,000 people living with HIV/AIDS needing housing assistance. For the past few years, HOPWA has only been able to serve about 55,000 households, but with the Biden administration’s proposal for FY23 at $455 million, that number would drop by 10,000 households at a time when we need housing more than ever.

HIV does not affect all Americans equally, making the need for adequate HOPWA funding in certain communities more important than ever. 93% of HOPWA funds serve extremely-low to very-low-income households. During the last program year, 10% of HOPWA’s homeless beneficiaries were veterans and another 41% were considered chronically homeless. The program placed 22,984 new individuals into housing while providing housing for 49,880 households, provided 105,071 individuals with supportive services, and 111,228 individuals with housing information services. 66% of HOPWA funds are serving the BIPOC community.

It has been a priority by the current and past administrations to end the HIV/AIDS epidemic in America, and if congress and the President are serious about this bipartisan goal we implore you to fund HOPWA at least at $600 million for FY23.

If you have any questions about this letter, please contact Lauren Banks, Executive Director, at the National AIDS Housing Coalition (LaurenK@nationalaidshousing.org). 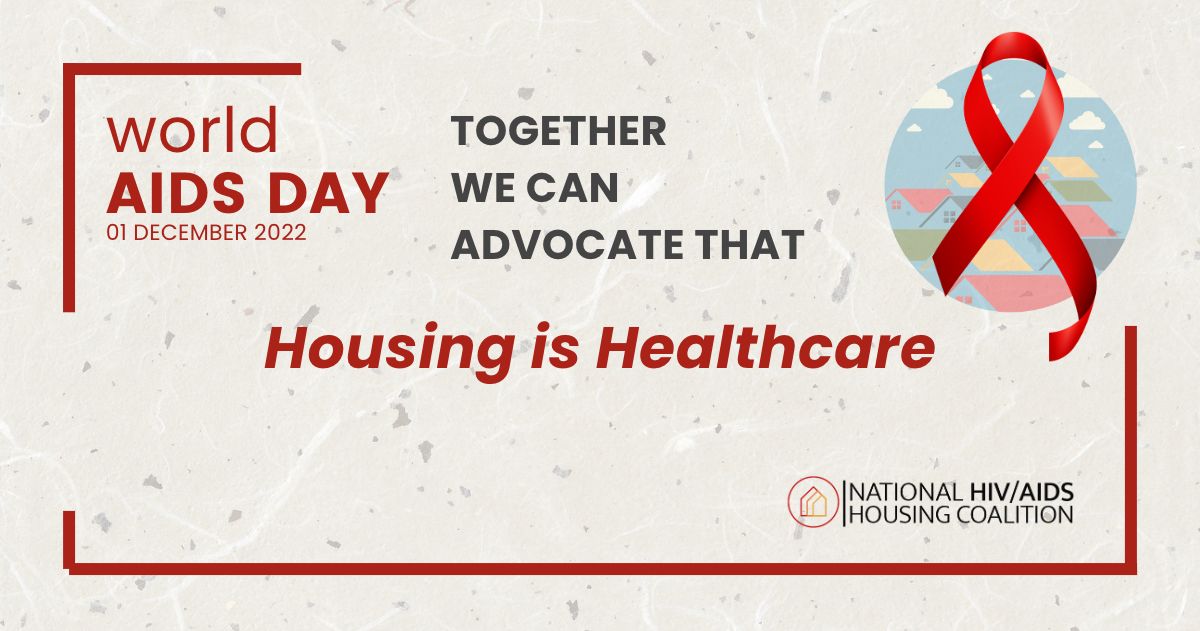 FOR IMMEDIATE RELEASE November 2, 2022  Contact: Lauren Banks  Executive Director  lauren@nhahc.org PDF of Press Release | NHAHC November 2  Since 1993, the National AIDS Housing Coalition (NAHC) has secured safe, appropriate, and affordable housing for those who are at risk of and living with HIV and AIDS. Today the organization becomes the National HIV/AIDS Housing Coalition (NHAHC). Our subtle name-change

The House has written into their THUD bill for the fiscal year 2023 $600 million for HOPWA programs! We see this as a step toward ending HIV/AIDS homelessness in the United States and demonstrate a commitment to ending the HIV/AIDS epidemic in the United States. However, we need your help to make this happen with the Senate.This House bill is just

PDF Version of NAHC Press Release June 23, 2022 Yesterday, June 22, 2022, the House Transportation-HUD Subcommittee released their fiscal year 2023 (FY23) funding bill (text is here). The subcommittee has allocated $600 million for the HOPWA (Housing Opportunities for Persons With AIDS) program for FY2023. This allocation is what the National AIDS Housing Coalition and community advocates asked for and